In her own words… 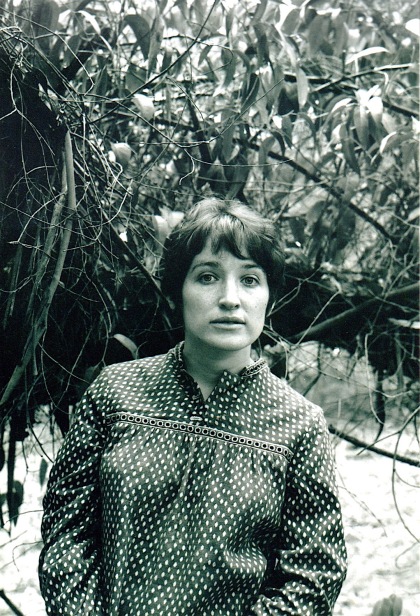 I grew up on the North Shore of Long Island and later attended an excellent, arty college called Bennington in Vermont. There I did an undergraduate degree in Creative Writing by producing a collection of poems under the supervision of Stanley Edgar Hyman. In those days Cummings, Frost and Stevens were my heroes. Later, after I moved to San Francisco, I focused on the beat poets; Snyder, Ginsberg and Ferlinghetti. After moving to the UK in 1968, my idols became all songsters—Dylan, Young, Cohen, Mitchell and Browne. Some of this intense adoration I attribute to nostalgia and missing North America.

In San Francisco and Edinburgh I was a theatre costume designer over a period of 18 years. When our family moved to Manchester, I became a Tai Chi teacher for the next 20 years. In the early 80s Oli Senior and I founded a small magazine called Cahoots, which was concerned with alternative medicine, personal growth and spiritual practice. After five years we passed it on to others to run. Poetry and song lyrics were always simmering in the background, but it wasn’t until my 50th birthday that I decided to put poetry first once again. I subscribed to literary journals and treated myself to a residential Arvon course each year. I started submitting poems to journals and eventually had work accepted.

In 1994 I published a pamphlet with Smith/Doorstop. I had already published a few poems in The North, and Peter Sansom, editor of both the magazine and the press, had been very approachable. The resulting little pink booklet went out of print pretty fast but the title poem, ‘Young Men Dancing’, was included in the Forward anthology that year.

Then Louise Hudson, editor of another small press, Fatchance, approached me about doing a first collection. The book, These Goodbyes, appeared in 1995. Since Fatchance Press was very small, the book was only available for sale through Louise or me, but it managed to get reviewed in several small and medium sized poetry magazines.

Still a beginner in contemporary British poetry, I enrolled at Manchester Metropolitan University on the MA course in Creative Writing. I loved being a student. I even attended undergraduate lectures and seminars. My tutors included Michael Schmidt, Jeffrey Wainwright, Simon Armitage and Carol Ann Duffy. I had truly come to poetry heaven! From Michael I learned that poetry had in fact begun before 1950 and that it even existed outside of the United States. From Jeffrey I learned how to assess and consider the written word. From Simon I learned to stand behind my own work and from Carol Ann I learned to be daring. But the most exciting moment came after I finished the course work, when Michael invited me to submit a manuscript to Carcanet. When I graduated in 2002 (38 years between my two degrees in the same subject) The Wedding Spy  already had been published.

Soon after, I was invited to teach a course called Verse to the young actors at The Arden School of Theatre where I already had been teaching Tai Chi for 12 years. The course, (which I inherited from the inspired founder of the school, Wyllie Longmore) soon evolved into a workshop for reading and writing poetry. The young actors showed extraordinary creative energy for all aspects of poetry, which made teaching this course the most exciting job I’ve ever had.

I also did some part-time teaching at MMU on the MA and on some undergraduate writing courses. These classes were also a treat for me, though my first task was to teach the workshops which Carol Ann Duffy would have taught had she not been on sabbatical. These were not easy shoes to step into, but eventually the students forgave me for not being Carol Ann and the term went very well.

Through my connections with young actors and creative writing students at the university, I was aware how little opportunity there was for performance of new work. The actors would prepare wonderful self-devised pieces that would be played for the staff and their fellow students and then never seen again. The writing students would produce fine work but never had the chance to read to a group other than their fellow students. I felt that these young actors, playwrights and poets needed a public performance platform in order to develop their work further.

I started the performance series Poets and Players in 2004, which received an Arts Council grant in 2006. Funding enabled me to pay the performers as well as myself and to produce lovely leaflets for each gig. Venues included my own Tai Chi Village Hall in South Manchester, The Whitworth Art Gallery and St. Ann’s Church in the city centre.

The very successful Poetry School had begun in London in 1997. I was a great admirer and had travelled from Manchester to attend some of their courses. I decided to get in touch with them about the possibility of opening a branch in Manchester. The timing of this approach was good, as the Arts Council had been encouraging the school to expand into the regions. The Manchester branch of the school was born over one enthusiastic meeting in London with Mimi Khalvati, the founder, and Tamar Yoseloff, the Programme Co-ordinator. A few months later the Manchester School was up and running.

In order to keep information moving between my various areas of interest in the Manchester poetry scene, I started an email circular called the Dear List. The list gave information about live poetry events in and around Manchester. One of my aims in starting the list was to bridge the gap between poetry events inside the university (which, in theory, are open to the public) and those events outside the university. The trouble seemed to be one of poor communication, which the Dear List attempted to address.

In 2005 I submitted a new manuscript to Carcanet. It had been four years since my last book and I had accumulated a lot of material, much of which had to be left out. For the book, I chose poems which dealt with a wide range of relationships—between students, teachers, siblings, ex-partners, housemates and of course relatives and lovers. Extended Family was published in May of 2006. Michael Schmidt gave me excellent editorial guidance for this book. I also enjoyed working with others at Carcanet—Judith Willson, Stephen Proctor and Eleanor Crawforth—and I’m grateful to them all for their patience and help.

(Note: Both Poets and Players and the Dear List are still running successfully today; the latter managed by Keith Lander.)

Tai Chi and poetry share a fascination with form, grace and essence. Through her devotion to both these arts, Linda developed courses which combined the two. Students learned slow clear movement patterns which then became the basis for writing exercises. These were often done in pairs and small groups.

Linda offered week long residential courses called The Moving Line in Spain at Cortijo Romero. Her course for The Poetry School was called Move and Be Moved.

Article: Move and Be Moved, some ideas on letting go